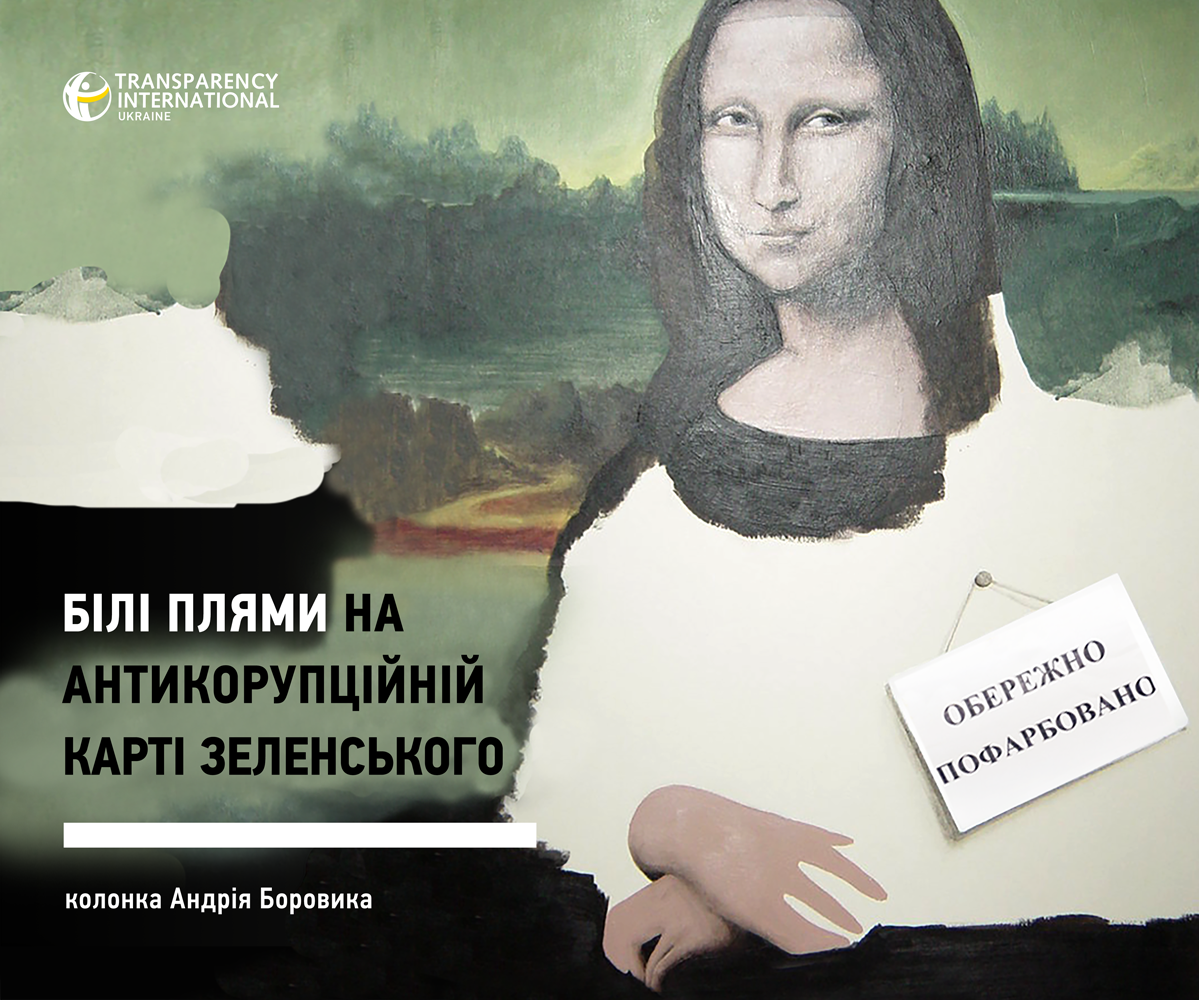 A year ago, during his inaugural address, Zelenskyy promised to build a country of opportunities where everyone would be equal before the law and live by honest and transparent rules. The Ukrainian chapter of the anti-corruption organization Transparency International, which has been promoting transparency, accountability and fair play for many years, has analyzed Zelenskyy’s achievements and failures in its field.

A year ago, during his inaugural address, Zelenskyy promised to build a country of opportunities where everyone would be equal before the law and live by honest and transparent rules.

Transparency International Ukraine, which has been promoting transparency, accountability and fair play for many years, had analyzed if Zelenskyy has made good on his promises.

According to the latest KIIS survey, only 26% of Ukrainians believe that Volodymyr Zelenskyy has been successful in reducing the level of corruption among public officials; 66% believe he failed this task. In addition, only 16% of Ukrainians believe that the President was successful in bringing the previous administrations to liability for corruption, while 73% believe Zelenskyy failed this objective, too. What’s with all the disappointing figures?

Every year, the global TI presents Corruption Perceptions Index (CPI) and provides universal advice to reduce the levels of corruption worldwide. TI Ukraine drafts its own annual list of recommendations with regard to the local context.

Volodymyr Zelenskyy and his team have had 365 days and two pools of recommendations. In our publication, we analyze what they have achieved and how successful the person condemning “kickbacks,” “flows” and embezzlement has been in the presidential seat.

According to the latest KIIS survey, only 26% of Ukrainians believe that Volodymyr Zelenskyy has been successful in reducing the level of corruption among officials, 66% believe that he did not succeed in this task.

Thanks to the so-called turbo mode in the last 4-5 months of 2020, half of TI Ukraine’s recommendations were fully or partially implemented. But now, less than a year later, many of these achievements are under threat or being invalidated.

For instance, in 2019, the Constitutional Court of Ukraine recognized asset declaration obligation for anti-corruption activists unconstitutional, and the Parliament finally granted the NABU with the right to independent wiretapping. In fact, this right is not yet being exercised, since there are no funds provided for this in the national budget.

The so-called mono-majority that entered the parliament under the “Ze” brand has also supported:

On the other hand, increasing oversight over political party funding, verification of information on final beneficiaries, the judicial reform and changes in SAPO management are uncharted waters on Zelenskyy’s anti-corruption map.

Same with the long-promised reform of the Security Service of Ukraine, which would have to strip the SBU of uncharacteristic functions, such as investigation of economic and corruption-related crimes. Therefore, these recommendations remain relevant in 2020.

Another painful point is that despite big words, Zelenskyy’s system is yet to punish the people behind attacks on social activists. In Kateryna Handziuk’s case, there is even talk about the case being tanked on purpose. Zelenskyy says that he already knows who the organizers are, but it is up to the court to see the story through.

Has the President done enough to improve Ukraine’s score in the Corruption Perceptions Index? The answers are in the achievements and failures of the current year.

On the other hand, increasing oversight over political party funding, verification of information on final beneficiaries, the judicial reform and changes in SAPO management are uncharted waters on Zelenskyy’s anti-corruption map.

Year 2020: Setbacks and Risks of Regression

We can already say that the anti-corruption progress in Ukraine has slowed down significantly. If the fight against corruption was defined as one of the presidential team’s priorities before the new Parliament started its work, this focus has shifted now. Even the progress made back in the fall has halted or started gradually rolling back by now.

All the achievements and shortcomings of the anti-corruption work accomplished by Zelenskyy’s team will be reflected in the next Corruption Perceptions Index. In January, after the presentation of CPI 2019, the team of TI Ukraine prepared updated recommendations to improve the country’s score. As expected, some of them repeat or develop upon the recommendations made in the previous year.

So, what is happening now and where is this going? Let’s look at each individual point.

Formation of independent and professional judiciary: what is dead cannot die again.

The demand for a judicial reform is among the highest concerns in Ukraine, expressed by the public and international partners alike. However, the judicial reform remains in stasis today. In 2019, the Parliament supported the President’s draft law on the reboot of the High Qualification Commission of Judges (HQCJ) and cleansing of the High Council of Justice ranks (HCJ). However, the implementation of the draft law was effectively failed. February 5 was the deadline for formation of the HQCJ and the Ethical Commission under the HCJ. Contrary to the law, the High Council of Justice has not taken any action to form the two entities, which has technically led to a stalemate.

The situation does not prevent the HCJ from pressuring scrupulous judges, though. Some examples are the cases of judges Holnyk and Fomin, where the HCJ was inundated with similar complaints of questionable validity. None of these accusations were ever proven.

Independence and Capacity of Anti-Corruption Agencies: One Step Away from Failure

Since the fall, we have been observing constant politicization of the work performed by the SIB, the NABU, the SAPO, and the pressure on these institutions. In 2020, the trend has only increased.

Independent audit of the NABU’s activity is yet to be conducted. Meanwhile, in the recent months, there have been multiple attempts to dismiss the Bureau Director by changing applicable legislation. The law on NABU clearly specifies the conditions for the dismissal of the head of this agency. And since the Constitution prohibits the reverse effect of the law, MPs propose to include in the transitional provisions that the law also applies to the current Director. The Law Enforcement Committee has already approved draft law 3133, which, if passed, will lead to dismissal of the NABU Director.

The only noticeable progress in the work of anti-corruption bodies is that soon enough there will be legislative changes to improve the efficiency of the ARMA, which can be attributed to Zelenskyy’s team. This document is currently being reviewed and finalized in the Parliament. However, it is too early to talk about the timing of its adoption and implementation. Another achievement of the past year, in a way, is that during this time, the NABU, the SAPO and the HACC have not complained about the pressure of the authorities.

In 2019, the Parliament supported the President’s draft law on the reboot of the High Qualification Commission of Judges (HQCJ) and cleansing of the High Council of Justice ranks (HCJ). However, the implementation of the draft law was effectively failed. February 5 was the deadline for formation of the HQCJ and the Ethical Commission under the HCJ.

Despite all the statements, the SBU reform remains but a distant dream. Nine months have passed since the appointment of the new Head of the Service, but the Ukrainians have not yet seen the law that would optimize the agency’s work.

On May 20, the draft law on the SBU proposed by the President was sent for a repeated first reading without revision. As of now, it does not strip the SBU of uncharacteristic functions.

On January 1, 2020, the new Electoral Code came into force, and on January 16 so did the Law on Preventing and Combating Political Corruption. It provides for changes in financial reporting and removal of certain restrictions on the sources and means of political party funding. Paperwork in the NACP will be digitized, which will greatly facilitate both preparation and processing of these documents in the Agency.

On April 13, 2020, the Verkhovna Rada adopted a law that allowed parties to abstain from state funding for one, two, three quarters or a year. Also in October 2019, the Parliament passed a law that reduced the annual amount of party funding by half and raised the threshold for state funding of political parties from 2% to 5%. TI Ukraine criticized this step as one that can cause the stagnation of the country’s political development.

Despite all the statements, the SBU reform remains but a distant dream.

The key agency responsible for the results of privatization is the State Property Fund of Ukraine. In the revenue part of the budget for 2020, targets were set at UAH 6 billion from large privatization and UAH 6 billion from small-scale privatization. However, given the decline in economic growth and the COVID-19 pandemic, the budget was sequestered in April 2020, and the total expected revenue from privatization was reduced to UAH 500 million.  By the way, as of May 19, there have already been 149 successful auctions held in 2020, with UAH 472 million transferred to the budget.

Privatization has become much faster and more active. If the dynamic stays on track, we can expect a revenue of at least UAH 1.5 billion. However, the main source of the revenue is still large-scale privatization, which has not even started as of mid-May 2020. On the one hand, the reasons include the economic downturn and the quarantine, on the other hand, there’s the lengthy process of preparing the object for sale. According to the SPFU, preparation for large-scale privatization of one object takes 11-12 months before the auction starts. Therefore, the first auctions should be expected closer to fall 2020.

As we can see, many problems that the previous government failed to solve, in particular, the judicial reform and reform of law enforcement agencies, are overlooked or ignored by the current presidential team. And this does not just slow down anti-corruption progress, but also stops us from completing the systemic anti-corruption reform.

The demand for combating corruption in the society remains high. According to the recent NACP research, 69% of Ukrainians consider corruption one of the key problems in the country. The spheres considered the most corrupt are, as before, the customs, courts, the Parliament and the prosecution. Half the surveyed regular Ukrainians and business representatives agree that the judicial reform is the first priority in the anti-corruption struggle, and over a third of them have supported changes in the law enforcement and the prosecution.

Even though the problem of corruption is disappearing from Zelenskyy’s rhetoric, we would like to believe that he still has the political will to reduce the level of corruption in Ukraine. Otherwise, these blank spaces on his anti-corruption map will turn into entire empty pages in the history of Ukraine’s anti-corruption struggle.

The spheres considered the most corrupt are, as before, the customs, courts, the Parliament and the prosecution.