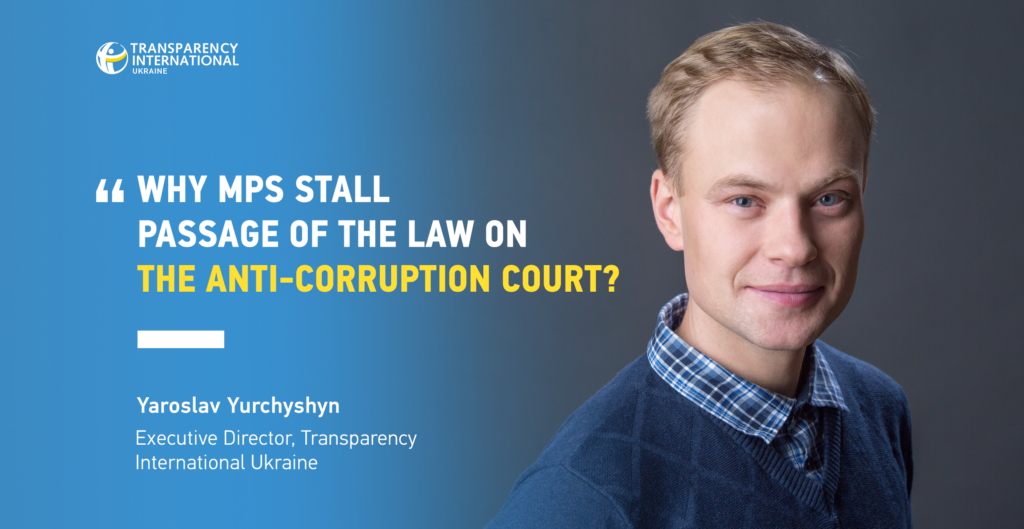 MPs had three days to consider 1925 amendments to the draft law “On Anti-Corruption Court.”

High time they stopped dragging it out. Doing so, Ukraine violates its commitments to the IMF and other international partners. Optimists, including the Speaker of the Verkhovna Rada, did everything to ensure that the country would obtain the crucial act on May 24. Realists did understand that no assumptions made sense until an agreement on key amendments has been reached – those that determine decisive powers of international experts when it comes to the selection of the judges to the future court. No agreement has been reached. MPs did not dare to vote for those amendments (with numbers from 690 to 740) so far. They were put on the back burner. That was a remarkable example of looking for a compromise not under the dome of the Parliament but elsewhere.

It was the Presidential Administration that became the main opponent of compliance with the recommendation of the Venice Commission on the key role of the Public Council of International Experts when selecting judges. Probably, for fear of seeing “necessary” candidates among those who got “veto.” Or, perhaps, due to the political desire to postpone an adoption of a draft law as much as possible. That is, to be sure it would not be established until the next presidential, and in the optimal way until parliamentary selections. In any case, once it is adopted, it will take 9 to 12 month for all the procedures of sselections, legislative and administrative formalization.

However, public rhetoric concerning the defense of this stance is completely different, of course, and is always changing. Only a few months ago, members of the presidential political force were speaking about the necessity to preserve sovereignty and protect our country from external control. And now, faction leader of the Petro Poroshenko Bloc Artur Herasymov is worried that someone can try to overturn the High Anti-Corruption Court act through the Constitutional Court of Ukraine.

And it’s precisely due to the key role of the international experts. Of course, the erosion of sovereignty and fictitious unconstitutionality is a sham for the voters. However, negotiations are still ongoing and there is a chance for a compromise. As well as the search of new hair-raisers on the same old subject with only one purpose – to delay the adoption of the law at the utmost and as the result, delay the formation and operation of the future court.

As of now, the main debate is about a person who will seal fate of a candidate for the position of a judge of the Anti-Corruption Court and will be given a “no” as an answer from the Public Council of International Experts (PCIE) – in other words, how to overcome a “veto” of international experts. There are two outlined concepts, which in theory can reach a compromise. The first one implies the consideration of an appeal against a decision of PCIE by a joint committee composed of the whole Council of International Experts and High Qualification Commission of Judges of Ukraine (HQCJ). Mathematically, this Commission will look like this: 23 members, of which 7 are international and 16 are members of HQCJ. To overcome a “ban” of a candidate, two-thirds of the votes will have to be given. Yet, the numerical superiority between HQCJ and PCIE catches the eye. If such a standard is approved, it means that a candidate rejected by the international experts will be greenlighted by the members of the Qualification Commission of Judges of Ukraine and will be able to proceed in the competition.

Western partners of Ukraine (the Venice Commission and the International Monetary Fund) consider this scheme to be more than doubtful, keeping in mind the selection experience of the Supreme Court:  back then, the HQCJ reinstated the majority of candidates considered by the Public Council to be dishonest representatives. Moreover, abovementioned international partners insist on the remark that among these 2/3 there should be more votes of international experts (4, 3 or 2 – is to discuss). The second concept implies the consideration of the appeal on behalf of PCIE. In that case, the decision should be made by two-thirds of the international experts or by the entire Council. To expect this option to be accepted by the Presidential Administration, of course, is out of the question. That is why the debates are centered on an understanding of what makes up “two-thirds” in the first concept. And here is when the aforementioned 1925 amendments step in. 100 amendments per hour is time that allows you to stall and keep on negotiating. Not forever, though.

However, there are a few more stages that could allow the authorities to increase their influence on the procedure of selection of judges. It is stated in the presidential draft law that the candidates to the Public Council of International Experts have to be presented by “international organizations which cooperate with Ukraine in the field of corruption prevention and counteraction in accordance with international treaties of Ukraine.” Considerably vague phrasing that, in fact, can allow the Administration to put their “puppet experts” in the Public Council the same way as they tried to assign not very competent international representatives as NABU auditors. It would be way clearer if these organizations were under a specific legislative definition. For instance, limit their list to those organizations that provide Ukraine with technical assistance within the Anti-Corruption Reform. In other words, it is necessary to formalize the important role of the donors, among others. After all, it makes sense that those who finance the reform want to influence its effective implementation. This type of control shouldn’t be confused with a mythical “external control” which is used in unison by government authorities and opposition from different factions to frighten the public. Other countries serve as an example. For instance, in Indonesia, international experts also participated in the selection of judges for a similar court. In addition, in Guatemala, foreign experts were even assigned as the judges. Well-known are the examples of Singapore, UAE, Qatar, Kazakhstan where non-citizens work as judges. Does anyone daresay these countries are not sovereign? And there is no need to roll your eyes like our politicians do when Ukraine is compared to one of a non-European country. In order to live like “in Europe” and not only to go there on vacation or for medical treatment, the majority of Ukrainian politicians have to learn to take responsibility for their actions and put an end to stealing the taxes of their voters. Or be charged with it, like in Europe.

In Ukraine, the Public Council of International Experts will not assign judges. Its role is to be a filter that sifts through all potential candidates for the main criteria – integrity. Was this candidate spotted in a close liaison with other branches of government? Does his standard of living correspond to the legal income? Has he ever been involved in any corruption scandal? Has he ever violated ethical standards and has his judgment ever been biased? These are the questions to be answered by the Public Council. Unfortunately, the practice of implementation of publicized by authorities judicial reform showed that Ukrainian judiciary is not capable of self-purification. In spite of negative conclusions of the Public Council of Integrity, frankpledge and corporate solidarity allowed even those judges to hold down their jobs who sent Maidan protesters to pretrial detention center and even uphold the verdict against the current Prosecutor General.

Those who are allowed to judge are servants of Themis living in palaces built by means of unknown origin. The story cannot be repeated while creating the most important court in our country – the court that, from the very next year, can lock up top corrupted representatives of the government. Therefore, negative conclusion of the PCIE can be reexamined only in exceptional cases. Further on, it is a duty of the High Qualification Commission and the High Council of Justice to determine which one of the candidates has better professional qualifications. It is the President’s prerogative to assign judges of the future Anti-Corruption Court. Not the Public Council of International Experts but only the president will assign judges by his decrees. This is the sovereignty in strict accordance with the Constitution.

In view of this, anticipation of the adoption of the Anti-Corruption Court Act is postponed until June. The survival instinct should force Ukrainian authorities not to miss this deadline as well. Ukrainian economy needs the funds from the IMF in August at the latest. Moreover, the President will not be able to brag about the actually established High Anti-Corruption Court during his next election campaign if the law is not adopted in the near future. Just like he is constantly putting an emphasis on his key role in creating the National Anti-Corruption Bureau and The Specialized Anti-Corruption Prosecutor’s Office. After all, in the most optimistic estimates, the court may begin to work in spring 2019. Only if the vote in its favor is cast at the next plenary session.