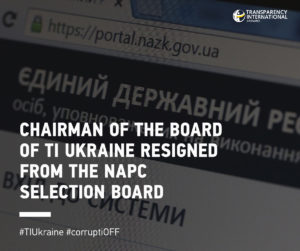 On October 10, 2017, Chairman of the Board of Transparency International Ukraine Andrii Marusov announced his withdrawal from the selection board of the National Agency for Prevention of Corruption.

The Ukrainian chapter of the global anti-corruption network Transparency International emphasizes that an important role of the public in the interaction with the newly created anti-corruption bodies is ensuring an open and effective selection process of candidates to these bodies. Unfortunately, as the authorities were intent on establishing control over the National Agency for Prevention of Corruption, there have been several events detrimental to the quality of competition for the positions of NAPC members. One of such events was the vote for Oleksandr Skopych from his immediate superior Kostiantyn Vashchenko, where the court failed to see a conflict of interest. An equally doubtful decision was the acceptance and subsequent appointment as the head of the Agency of Nataliia Korchak, who is not sufficiently qualified for such a position, yet is close to politicians from the Narodnyi Front party. Such political bias is impermissible for the head of the main body for prevention of corruption of the country. After Ruslan Riaboshapka’s failed attempts to fix NAPC’s work and subsequent withdrawal from the agency, the authorities cemented their control over the selection board. It led to objectively strong and professional candidates failing to obtain a position at NAPC.

Transparency International Ukraine CSO acknowledges its part of the responsibility for the situation in NAPC, as it supported the creation of this body from the point of the draft law, yet asserts that it did its best to change the situation. Yet, the government ignored TI Ukraine’s call to review the issue of accountability for disruption of implementation of e-declaration in August and September of 2015, and later took no notice of TI Ukraine’s statements on the recurrent problems with every new stage of declaring. Eventually, the NAPC management was never brought to account, while the demand of the public to replace it through introduction of changes to the law on NAPC was ignored. Now, the authorities have chosen to replace the management of the agency but do it behind the scenes – through pressure and replacement of the current team with one that would be even more dependent.

As Andrii Marusov, Chairman of the Board of TI Ukraine, has explained, “Taking into account that one vote is not enough to significantly influence the processes in NAPC, and the authorities completely ignore the stance of our organization, the members of the Board of TI Ukraine have made the decision on my withdrawal from the selection board. We envision that the politically dependent management of NAPC can be used in the political race. It is a shame, since the functions attributed to the agency in politically motivated hands can completely discredit the idea of prevention of corruption.”

Transparency International Ukraine asserts that it will closely observe the future work of NAPC and immediately inform the Ukrainian and international public on any instances of politicization of the agency’s work.