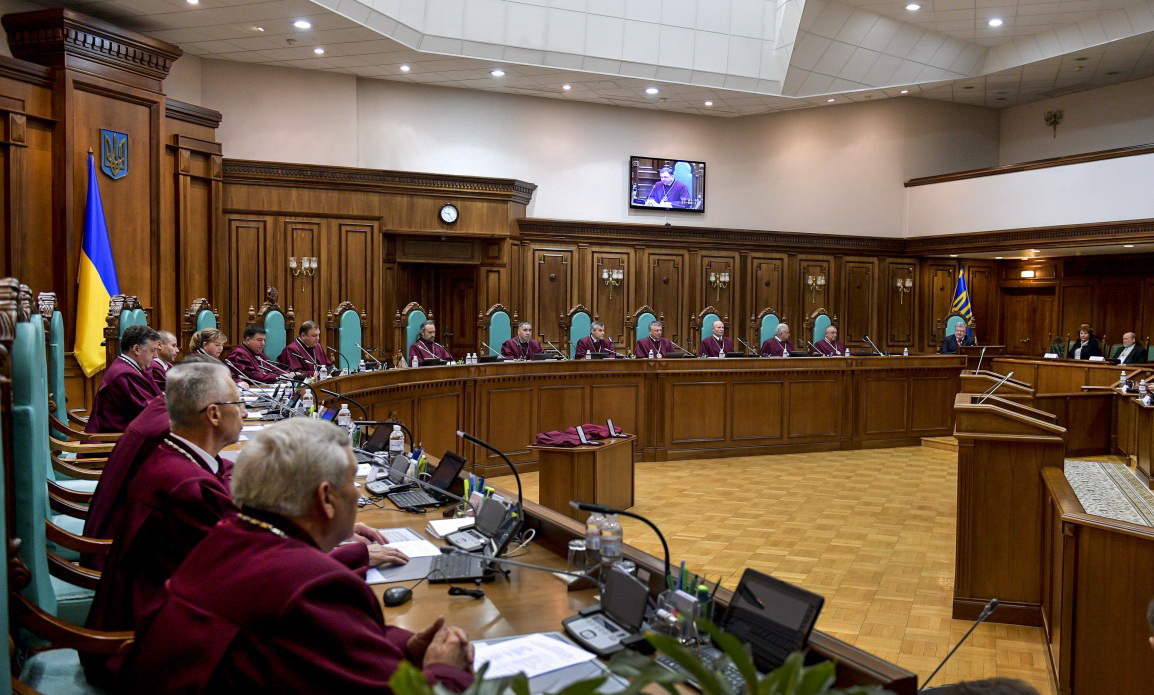 Decision of the Constitutional Court on Certain Powers of the President

On December 17, 2019, the Constitutional Court of Ukraine published its conclusion on draft law No. 1014.

Here is a brief overview of the rationale behind the Court’s decision.

The court has once again reiterated that the principle of division of power into three branches (legislative, executive and judicial) is not the purpose but the means to ensure citizens’ rights and freedoms. How does it work?

This triangle of power clearly reflects the designated purpose of each public agency, the nature of tasks they perform, and provides not only transparent and clear division of agencies into different branches, but also ensures a system of checks and balances which allows to maintain a healthy equilibrium of mutual influences and distribution of authority required for the country to function.

The court says that even though law enforcement agencies have different statuses in the specialized laws (the NABU is a national law enforcement agency, while the SIB is a central body of executive power), as pretrial investigation agencies, they have similar functions, sphere of activity and powers and both have characteristics typical of a central body of executive power.

Thus, it is unclear why the President should have the power to appoint their heads. Under the Constitution of Ukraine, it is the Cabinet of Ministers that has this authority over central bodies of executive power (Article 116, clauses 9-1, 9-2 of the Constitution).

The Court points out that the legislators effectively try to constitutionalize the powers of the President “which he does not currently have” (because the Constitution sets forth an exhaustive list).

At the same time, the Court explains that granting the President with the power to form the NABU will endanger both the NABU’s independence and its very existence. The Court believes that the power to form an agency is inseparable from the power to dissolve it, even if the law does not say so directly.

The Court has previously applied this analogy when interpreting the President’s power to form courts (the decision of June 21, 2011 No. 7-rp/2011). The Constitutional Court thus believes that the power of the President to form the NABU will lead to the weakening of its independence and instability in the organization of the Bureau’s activity.

Analyzing this provision of the draft law, the Court also says that even if certain agencies are formalized in the Constitution (like the Security Service of Ukraine, the Anti-Monopoly Committee of Ukraine, the National Bank, etc.) this formalization should be done without a separate decision on their formation made by a certain subject.

Recognition the unconstitutional nature of this provision was the most obvious given a recent Constitutional Court judgment on the National Commission for State Regulation of Energy and Public Utilities of June 13, 2019.

Judges did not repeat their reasoning on the nature of regulatory agencies, instead just pointing out that such powers would create problems with distribution of spheres of activity of the President and the Cabinet of Ministers and disrupt the system of checks and balances between branches of power.

The judges focused on preventing a vague definition of the sphere of activity of independent regulatory agencies which the President will have the power to create. The proposed provisions in this part do not comply with the principle of legal clarity, which is an important element of the rule of law. This vagueness can lead to arbitrary decision-making.

Summing up, the Constitutional Court of Ukraine recognized each provision of draft law No. 1014 inconsistent with Article 157, clause 1 of the Constitution of Ukraine, meaning this draft law violates the principles of the rule of law and distribution of power among public authorities and thus restricts people’s rights and freedoms.

What consequences will the judgment entail?

Despite that, the court has expressed its stance and reservations concerning the nature of the NABU and the SIB as pretrial investigation agencies.

Formally, this conclusion will have no impact on the activity of the NABU and the SIB. These agencies will continue to perform their functions as prescribed by the law. However, the reasoning of the Court should be used as a basis for legislative amendments to specialized laws regulating the activity of these law enforcement agencies.