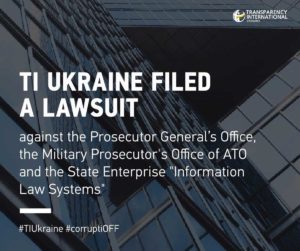 The Chapter of the international anti-corruption organization Transparency International Ukraine filed a lawsuit in Kyiv Regional Administrative Court against the Prosecutor General’s Office of Ukraine, the Military Prosecutor’s Office of the ATO forces and the SE “Information Court Systems” to cancel the unlawful decision on secrecy concerning seizure of USD 1.5 billion funds of the “Yanukovych criminal organization”. TI Ukraine is demanding to publish this court verdict.

It has been almost six months since the General Prosecutor’s Office seized the 1.5 billion dollars of funds of the former regime.The court decision on the arrest of these funds has not yet been made public.Transparency International Ukraine believes this is a disturbing message, because, on the one hand, the society is unaware of individuals accused in the crimes and the exact amount of money forfeited, and, on the other hand, the decision can be challenged because of certain technical pitfalls. Transparency International Secretariat and its Ukrainian chapter have already addressed the Ukrainian Parliament with a request to publish the results of the trial. However, representatives of the Prosecutor’s Office ignored the committee meetings and did not justify their position before the MPs. Instead, the Ukrainian chapter of TI was falsely accused of “the disruption of state defense order” by the Chairman of the Defense Committee of the Verkhovna Rada.

The state-owned enterprise Information Court Systems, obliged to publish judicial decisions in the open United Register of Court Decisions, has referred to the prohibition of prosecution authorities. The Prosecutor General’s Office has also recognized the top secret status of this court decision.

To get a reasonable explanation from the authorities concerning the reasons for obvious violations of the legislation, Transparency International Ukraine was forced to file a lawsuit in Kyiv Regional Administrative Court against State Enterprise Information Court Systems, Prosecutor General’s Office of Ukraine and Military Prosecutor’s Office of the ATO. TI Ukraine is demanding to cancel unlawful decisions on the case secrecy and oblige the state bodies to make the court verdict available to the society.

As Andrii Sliusar, TI Ukraine’s coordinator of top-corruption prevention, points out: “We hope that officials will attend the hearings, and the court will quickly determine all the circumstances, and society will finally learn about the nearly legendary ruling.”.Since the hearings are held openly, we invite everyone to join in and monitor the progress.We will inform about the time and place of the hearings additionally.