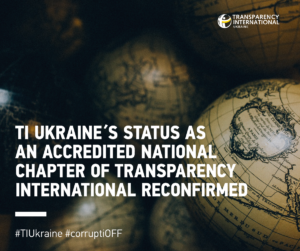 In his letter, Mr. Ugaz wrote, “Following consideration of the recommendation of the Membership Accreditation Committee (MAC), the TI Board of Directors has decided to reconfirm your Chapter’s status as an accredited National Chapter of Transparency International.”

José Ugaz also thanked TI Ukraine for continuing to make a significant contribution into TI movement in our country and encouraged cross-chapter exchange and cooperation.

Mr. Ugaz’s letter is complemented by the accreditation agreement between the National Chapter (TI Ukraine) and the global TI. It says that both non-governmental organizations share the common goal of ensuring that the anti-corruption Movement is strengthened.

To maintain the status of a National Chapter of TI, the Ukrainian office had to prove that it actively worked to prevent and combat corruption, adhered to the approved procedure of board selection, had internal policies, regularly held events which contributed to reducing corruption, had significant media and social network publicity.

TI Ukraine obtained the status of a National Chapter of Transparency International back in 2012. Two years later, at the membership conference of the global anti-corruption movement, the organization obtained full accreditation.