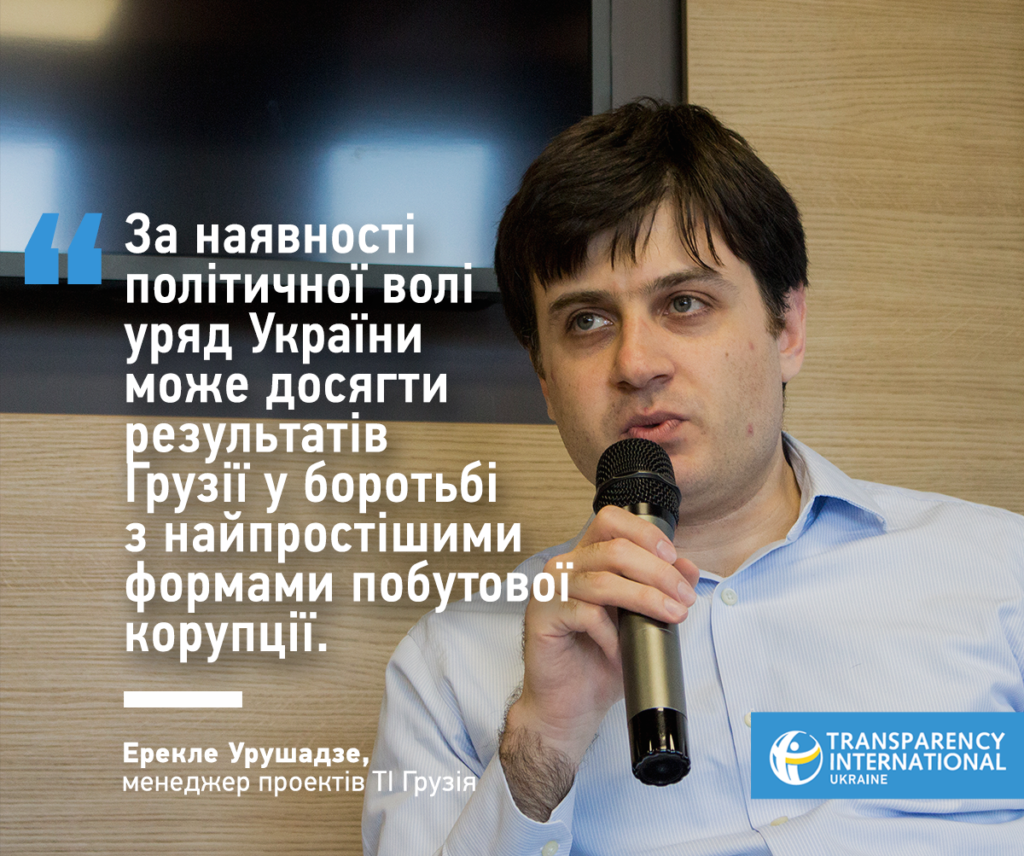 Erekle URUSHADZE: “The authorities are usurped so much that it is impossible to imagine how and who can fight with close associates.”
Reforms introduced in Georgia in the middle of the 2000’s is an excellent example for Ukraine cited by many of the international institutes. With this in mind, the team of the President Saakashvili “for a night” received Ukrainian passports and posts in big politics. But our interviewee, manager of the Transparency International Georgia (TI), Erekle URUSHADZE, explains that while Georgia’s increase in transparency rating corrupting in the country is far from the ideal known as the “Georgian miracle”. In an interview with “Den”, the expert provided some of the examples and concluded that grand corruption in Georgia has not been eradicated, and explained why such international organizations as the World Bank did nothing. Also, he said that Ukraine should be aware of the so-called anti-corruption reforms of the Saakashvili regime.
– Erekle, please tell us some words about bribes in Georgia. Do officials accept bribes or not?
– The level of petty corruption in Georgia, due to the reforms of the 2000’s, has been reduced to zero. This issue is one of the main achievements of the Saakashvili government. But the current authorities also try to do everything possible to fight corruption. According to various social surveys, the level of petty corruption and bribery in social services in Georgia is one of the lowest in the world. 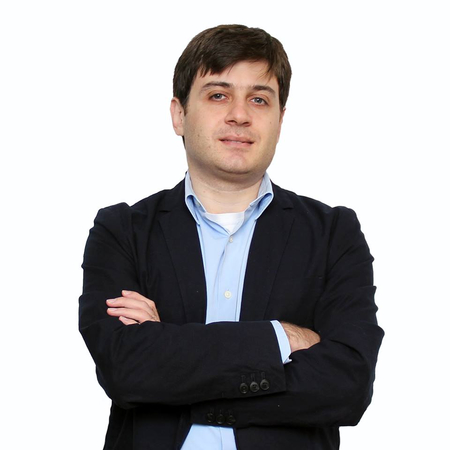 THE ALGORITHM used to fight petty CORRUPTION IS quite simple. We did not invent a new scheme. It is possible to use it in any country of the world if there is the political will. The first step is a penalty for corrupt practices. The authorities state it clearly enough they are not going to tolerate corruption in public services. And the electronic format of the services provided to citizens and deregulation policies reduces corruption.

— As for corruption “on the top”, the situation resembles the Saakashvili’s regime. I am speaking about the situation when journalists or public representatives report public at large about the corruption of top officials, but law enforcement agencies do take any actions, and the investigation is not carried out. For Georgia, it still remains a challenge and a serious problem to create an effective mechanism to disclose possible grand corruption cases.

—Why, in Your opinion, does it happen?

—The cause it trivial and the same as under Saakashvili’s rule – the absence of independent investigation bodies. We are talking about “classic Attorney’s Office” as well as some sort of a specialized agency on fighting corruption.
The main problem of Georgia, regarding fighting corruption, and democratic development in general, is an extremely high level of power concentration in the hands of ruling party. All institutes are usurped at such extent that it is impossible to image who and how can start fighting against his closest allies.

—Can You give us examples, based on which You make conclusions that authority in Georgia is corrupt now and was corrupt under Saakashvili?

—After parliamentary election, that took place in Georgia in November last year, we in TI analyzed donations to election funds of different political parties and compared them with declarations of persons who had made them. And we identified a number of parliamentarians which donated a sum of money to an account of ruling party’s election fund that nearly equaled and sometimes even exceeded their declared annual income. We informed about this facts public at large. And those facts, at least, should be investigated. Because there are two options of violations that showed by them. First option is fictitious donations. It means that those people did not really transfer donations and their names were simply used to cover up true “sponsors” or bypass norm of law on political party’s funding. Or they incorrectly declared their income which is a violation. But there was no investigation.

Also last year we published a quite detailed investigation on activities of Minister of Culture and his deputy. Before they came in the public service they were a businessman. Their company profited on the organization of concerts with the involvement of famous western stars. After they took over the ministry exactly this company started to win most state contracts. Frequently without competition, without tenders. And, again, the case was not opened, the investigation was not carried out.

Until then we published reports on the involvement of officials in business. In the legislature of Georgia, it is clearly stated that public official can be the only owner of shares of commercial companies and cannot hold any position in it and profited from it. But some parliamentarians and ministers breached this norm and did not show their income from business activities in declarations, which is also a violation of legislature. But enforcement services do not see this also.

In 2011 the practice was situations when some companies got huge state contracts without open competition, without tenders. But after while owners of those firms had made a huge donation to the ruling party’s fund.

This is all cases, that show an opportunity to conduct corrupt activities. All of them were investigated and presented by us, by our colleagues from civil sector and by journalists. But I cannot remember any case when anything from what I have just mentioned forced law enforcements to open the case and carry out an investigation.

—In the interview to “Den” magazine (“Foreigners will not help, You need your own will” from December, 8 of 2014) Mikheil Saakashvili showed zero level of household corruption as an argument of grand corruption absence in Georgia under his rule. It was stated, how can a superior, who takes bribes himself, convince subordinates to not act the same way?!

So if “clerks” really did not take bribes then top officials also could not, as Saakashvili assured us. But You say that household corruption still remains at zero level, but You can present tens of cases of grand corruption in two minutes from memory. Why is it so? What has been broken? Why does logic of Saakashvili’s argument not work more?

— It did not work even then. Personally, I have never been able to understand this argument to the end. And now it sounds absurdly even for Saakashvili himself. Because under the logic he should admit that grand corruption does not exist in Georgia even now, because of household corruption still at zero level. But as Saakashvili, as well as representatives of his party, accuse current top authorities in corruption

As now as then, under Saakashvili, we in TI knew that there were some forms of corruption not connected to household corruption. Such as those constructed in a form of pyramid when money goes from low ranks and then distributed at the top. Average policeman really does not take and cannot take bribes. But dealing with a system of public procurement there are many “shadow stories” when tender of Ministry of Defense is won by companies connected to Minister of Defense, for example.

Saakashvili’s government, in my opinion, really had an honest desire to curb the level of corruption. When they came to power they understood that if they do nothing with corruption in the state then their government would collapse the same way as previously. Under Shevardnadze’s rule, which lasted until the end of 2003, a level of corruption was so huge that power vertical had just collapsed under the pressure of opposition forces.
I am not going to state that Saakashvili came to power with the purpose of personal enrichment. But there were some his associates that really become very rich…And I do not exclude that personal enrichment was their motivation.

But analyzing Saakashvili’s rule in general then, batting all purposes stated above, he had the purpose to remain in power as long as possible. For this, it was needed control over resources. But he had to do this in a way closest to rule of law. So there were manipulations with state procurements aimed to get donations in election fund. They manipulated judicial power in order to impose control over several enterprises and mass media outlets. “Rustavi” or “Ahmedi” TV-channels under Saakashvili’s rule became the property of businessmen friendly to authority.

—You told that some members of Saakashvili’s government became rich. Can You tell their names? Are amongst them those who currently work in Ukraine?

—As it is known to me, they do not work in Ukraine.

Regarding names than the example of former defense minister David Kezarishvili is paradigmatic one. This man became one of the most influential businessmen in Georgia. He concentrated fuel sales in his hand. Through a network of companies, he took control of almost all advertising market. Saakashvili once a time had admitted that Kezarishvili was the main donor of his political party.

There is a list of names that earned huge profit from state procurement.
In Georgia participation of top officials in corruption schemes could be investigated after the change of power. Saakashvili’s party really opened cases against Shevardnadze’s government involvement in corruption. The current government opened cases against Saakashvili’s governing team. It is not excluded that next authority will initiate an investigation against the involvement of current authority in corruption.

—Erakle, how do You think, why international donors praised Saakashvili for successes in overcoming corruption. World Bank even published a separated tractate dedicated to the Georgian miracle of overcoming corruption. How was Saakashvili able to convince international donors that his team does not steal? Or does everyone know but kept eyes closed?

—There were reasons to admire Georgia. There is a list of spheres where Saakashvili was able to reform successfully. But there also had been problems – and serious problems, including fighting grand corruption. It is hard to say certainly why donors closed eye on this. Obviously, at that time the situation in region facilitated this. In regard to the absence of the progress in our neighbors, even our smallest success caused euphoria.

— How had an economic situation in Georgia improved when household corruption was overcome? Is there a clear connection between these two indicators? Is it real to become a rich nation by forbidding “road policemen” to take bribes?

— Economic growth in Georgia obviously took place. But it is difficult to say how much of it was caused by lowering of household corruption level. In the time it coincided. But the cause-and-effect link is difficult to determine. A list of other factors influence: lowering a level of crime, colossal state investments in infrastructural projects etc. Of course, the government had gotten much more money when corruption in the sphere of taxes collecting was curbed. And international donors started to give more money because they had seen that if even money was stolen but they were stolen at much-much lower extent. For example, under Shevardnadze’s government, they could allocate some help on the construction of the road, but the road was never ever started to build. Under Saakashvili, at the same time, the road was really constructed.

—What ways of fighting corruption could be effective in Ukraine?

—An algorithm of overcoming household corruption is quite simple. It was not invented by us. If the political will is available then it could be realized in every country. The first step is a criminal punishment for bribery.
Authority made clear to people that it would not tolerate corruption in the sphere of public services.

And, of course, deregulation, transferring of many services into an electronic format – this all also lowered number of opportunities for abuse.

—This way is already used now in Ukraine… In Georgia do people watch what happens here especially with Saakashvili’s team? What do people say?

—I have to frankly admit, that I do not think that there is any Georgian secret in fighting corruption. The truth is old as the world: if the political will is available Your government could reach the same results without any problems as Saakashvili’s government in the sphere of overcoming simplest forms of household corruption.
Alla Dubrovyk-Rokhova, Den