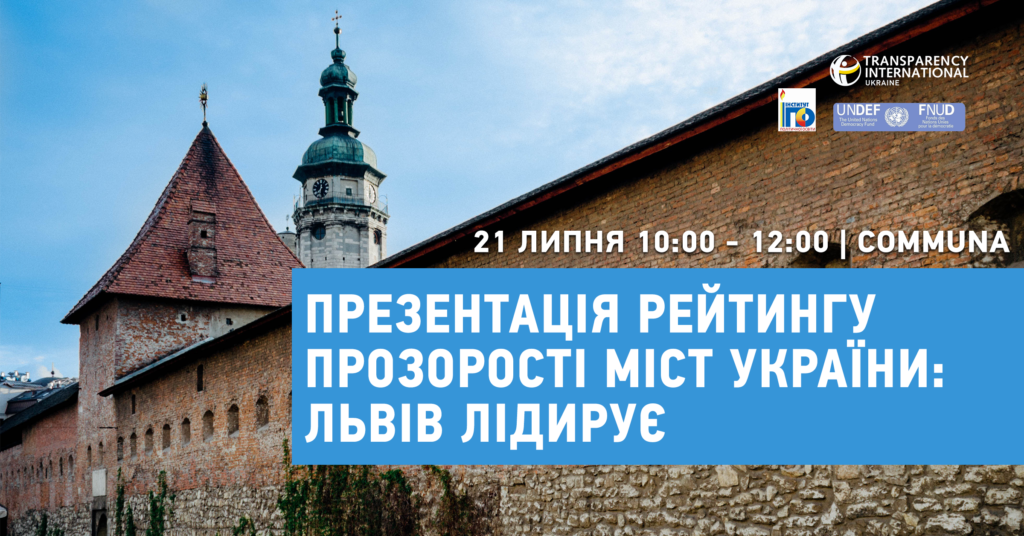 WE invite journalists and activists to presentation of the study results on the transparency rating of 100 Ukrainian cities. It will be held on July 21 from 10:00 to 12:00 Lviv at coMMuna co-working space at Halytska street, 1, 2nd floor (on the corner of Rynok Square). The study was conducted by Transparency International Ukraine with the support of the Institute for Political Education.
Lviv ranks the first place received 60 points for transparency out of 100 possible. It is one of five cities that obtained more than half of 100 points. Celebrating the victory, we should not forget about some gaps in the work of city authorities which prevented the city to get more points.
What were the main achievements allowed the city to be ranked the first? Which of the sphere got the lowest score? What steps are required to make Lviv transparent and keep its leadership position? These and other issues will be discussed at our event.
The team of analysts developed a top rating of cities using 91 indicators in 13 areas, including budgeting, land use, personnel policies, procurement, online services, and more. According to the research study, Lviv leads in such areas as participation and utilities. Thus, the cities authorities have to improve transparency of housing policy.
The results of the rating will be presented by:
Kateryna Tsybenko, Project Manager “Building Transparent Cities in Ukraine”;
Olena Gunko, Project Manager “Open Data in Lviv” at the Lviv City Council;
Myroslav Simka, Chairman of the Board of the Center for Public Monitoring and Research.
To participate, please register following the link: http://bit.ly/2uYXgrh
The project “Building Transparent Cities in Ukraine” is supported by the United Nations Democracy Foundation.
Contact  for media: Olha Tymchenko, Head of Communication Department  Transparency International Ukraine
Phone: + 38 050-352-96-18,
E-mail: tymchenko@ti-ukraine.org
Transparency International Ukraine is a national chapter of Transparency International, an anti-corruption NGO with over 90 national chapters; which operates in more than 100 countries. TI Ukraine’s mission is to limit the increase of corruption in Ukraine by promoting transparency, accountability, and integrity in both the public authorities and civil society. You can learn more about the organization’s activity on the website www.ti-ukraine.org