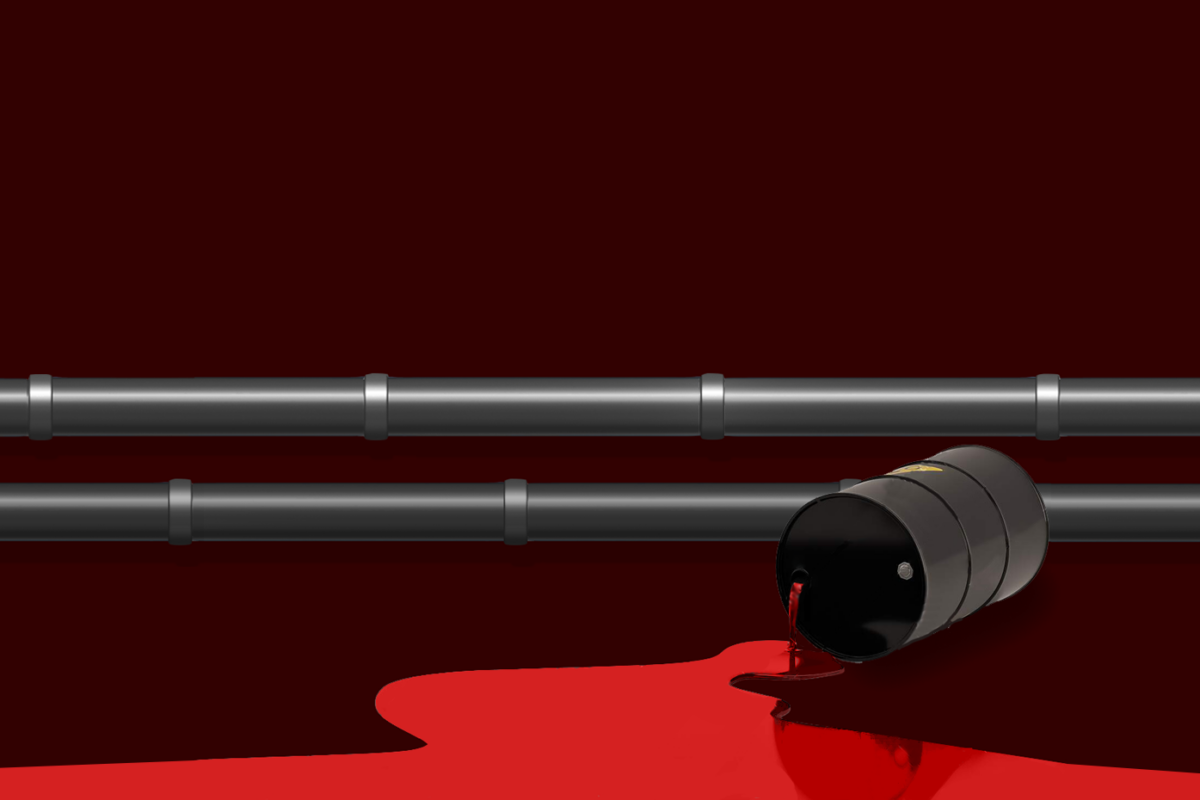 To whom and how many energy carriers russia exports, and whether the international community will manage to impose an embargo on them.

Because of the war in Ukraine, russia has already become the most sanctioned country in the world — it has even overtaken North Korea and Iran. However, most of the restrictions imposed do not have a destructive effect on the russian economy and cannot stop its aggression yet. Moreover, it manages to bypass some sanctions, for example, regarding individual enterprises. Therefore, the governments of the states supporting Ukraine are currently discussing more stringent restrictions, in particular the embargo on russian energy resources.

The US and Britain have taken the first step in this direction. On March 8, Joe Biden announced a ban on import of russian oil, gas, and coal. On the same day, Boris Johnson reported that Britain would give up russian oil and petroleum products by the end of 2022, and was also looking for ways to do without russian gas.

The European Union has so far dared to impose an embargo only on coal — restrictions on its import will be in force starting from August. However, this ban will not have a significant impact on the economy of russia. In the structure of its export, the share of coal in 2013-2021 was approximately 3%, while oil and petroleum products accounted for more than 42%, natural gas — 11%.

Bloomberg estimates that if current oil and gas prices are maintained, russia’s energy revenues this year will be approximately USD 320 bln. This is one third more than in 2019 and 2021, and twice as much as in the crisis year 2020. Former chief economic adviser to vladimir putin, Andrii Illarionov, suggests that only a real embargo on russian energy by Western countries can stop the war in Ukraine.

According to the International Energy Agency, russia accounts for 11% of the world’s oil production and ranks third in the world (first ranks the United States, second — Saudi Arabia). Russia received the most for the export of oil and oil products in 2013 — USD 281.3 bln. From that year until 2019, it constantly increased its export volumes. During this time, they increased by 30%. However, due to fluctuations in the price of oil on the world market, revenues from these exports did not increase in the same way. The second maximum was in 2018 — USD 207.4 bln. 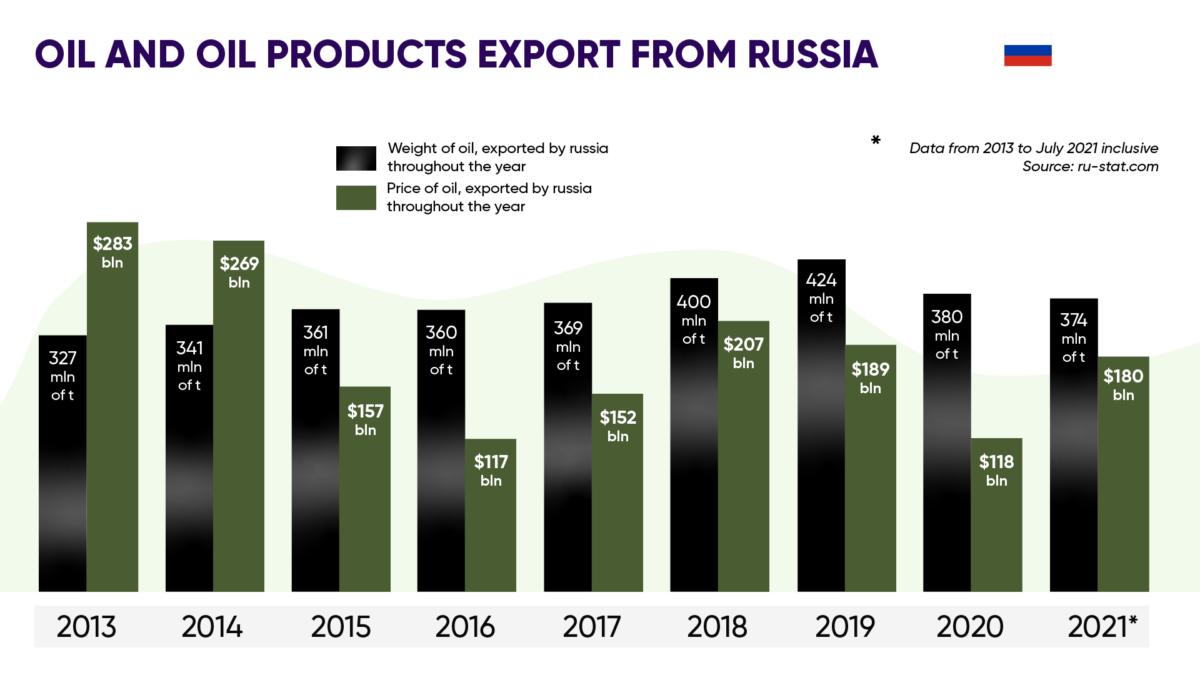 In 2021, the volume of export of russian crude oil was 230 mln tons, oil products — 144 mln tons. Last year, russia exported crude oil to 36 countries. Among the leading buyers are:

Most of the oil russia exports by sea — tankers ship it all over the world, in particular to refineries in Europe. However, because of russia’s war against Ukraine, it became more difficult to track them. Windward states that more and more tankers with russian oil and oil products are disappearing from radars, and their shadow activity has increased by 600%. According to international regulations, you can only disable systems that transmit a signal about the location of a tanker for safety reasons. However, Windward CEO Ami Daniel is convinced that russian vessels are concealing information about themselves in order to circumvent sanctions. Moreover, according to CNN, approximately 1.5 mln barrels of russian oil are secretly purchased every day by buyers who do not want to risk their reputation because of their relations with russia.

The oil company Shell Plc continues to buy russian oil under the cover of so-called blending, writes Bloomberg. That is, it sells a barrel, in which 49.99% is produced in russia, and 50.01% is supplied from other sources. Such Shell cargo is technically not of russian origin. To allow blending with russian energy resources, the company amended the so-called general regulations and conditions of its contracts.

However, Chinese national oil refiners, on the contrary, avoid new bidding with russian oil. They execute existing contracts, but refrain from new ones, despite significant discounts. Here, companies are listening to Beijing’s calls for caution as Western sanctions against russia intensify.

Russia received the most for its gas in 2013-2014, as in the case of oil, the level of income for the resource it has not yet managed to return. The largest subsidence was in 2020, while gas exports from russia amounted to only USD 26.1 bln. However, after the 2020 crisis, the revenue for it doubled to USD 54.2 bln. All thanks to the rapid growth of demand and, accordingly, gas prices.

It is also worth noting that russia conceals the volumes and directions of natural gas supply, attributing the sale of these resources to the group of secret export.

Overall, russian gas in the EU accounts for approximately 43% of all the gas consumed. It gets there via 4 main routes:

The rest comes from Norway, as well as in the form of liquefied natural gas from the Middle East, the United States, Libya, and Algeria. 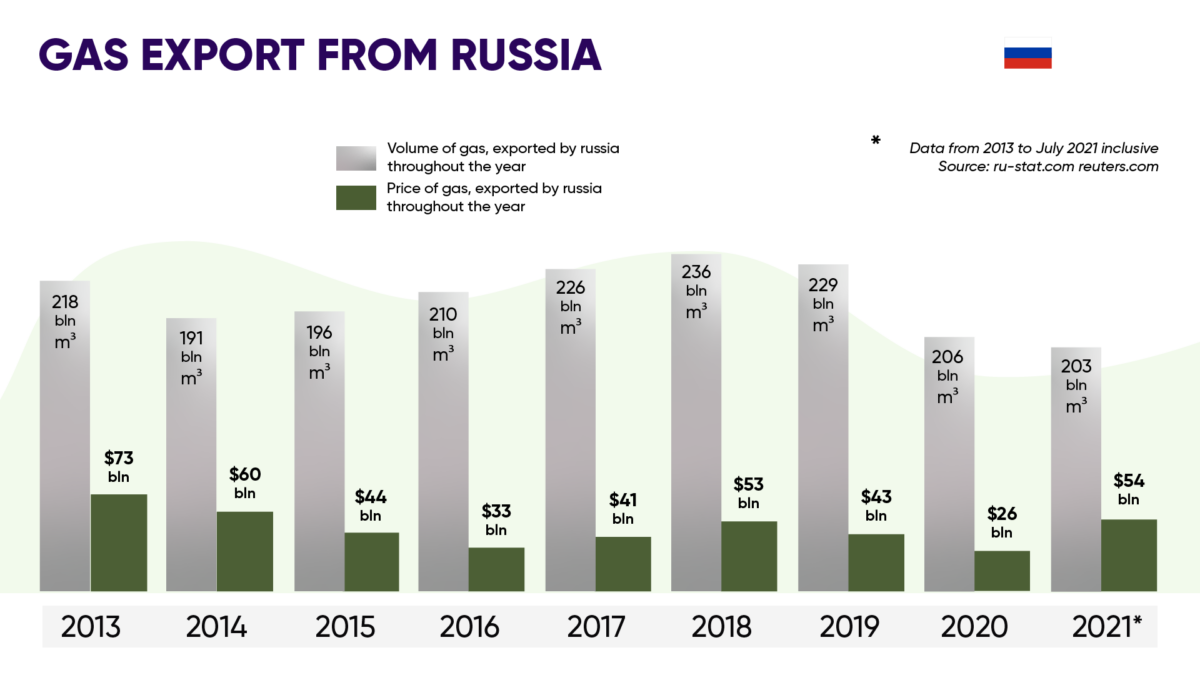 From April 2022, russia decided to convert the payment for the supply of russian gas to “unfriendly countries” to russian rubles. EU countries refuse to implement such a decision by the Kremlin. In particular, the G-7 countries stated that they would not pay for russian gas in rubles. Lithuania, Latvia, and Estonia have ceased receiving gas at all.

The EU has already presented a plan to make Europe completely independent of russian energy carriers by 2030. It involves the diversification of gas supplies to produce heat and electricity. However, there is still no unity in the EU’s decision on a complete embargo on russian oil and gas.

Of course, it is difficult to find a replacement for russian gas. The main reason is the network of gas pipelines, by which gas from russia comes to Europe. An alternative to it could be the import from Qatar, Algeria, and Nigeria. However, it will not be possible to quickly ramp-up export from there — the countries have already contracted their production with other buyers from Asia in the near future. The US has agreed to supply Europe with an additional 15 bln cubic meters of liquefied gas by the end of this year. According to the plan, by 2030, additional deliveries should increase to 50 bln cubic meters per year.

Finding an alternative to russian oil is much easier than to gas. Although the russia is a large supplier, but not a monopoly one. The US will open up the country’s oil reserves to keep oil and fuel prices from rising, and has asked Saudi Arabia to boost oil production.

Therefore, although it is difficult to give up russian energy carriers, it is necessary to clearly understand that for russia, the sale of oil and gas is the main resource for the continuation of the war in Ukraine. The EU purchases more than 40% of all gas and oil from russia. It is clear that it is much harder for the EU to give up russian energy carriers than for Britain and the United States. However, it is the European decision that will play a huge role in the effectiveness of economic pressure on russia.