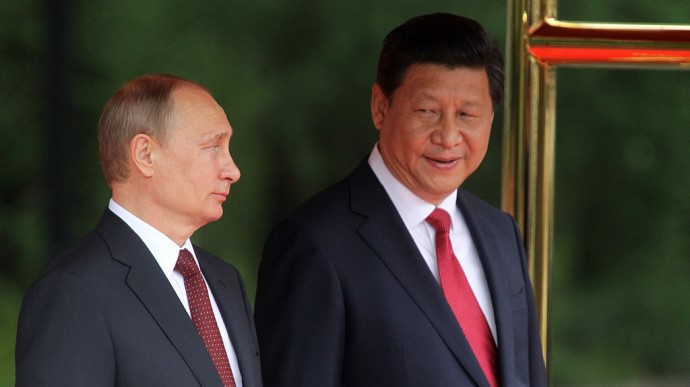 Mercantile friendship: how and why China helps russia circumvent sanctions

Mercantile friendship: how and why China helps russia circumvent sanctions

Because of the war in Ukraine, russia has already become the most sanctioned country in the world — it has even overtaken North Korea and Iran. However, these restrictions, despite their unprecedented scale, cannot immediately isolate the rf from the whole world. A number of countries in Asia, the Middle East, Africa, and Latin America continue to cooperate with russia: they help it transfer assets, sell and buy the necessary resources. One such country, which not only has not introduced sanctions against the rf, but has not publicly condemned russia’s armed aggression, is China.

So far, it is trying to keep a neat balance between the two sides: recognizing the Ukrainian territories and not providing russia with military support, but not condemning the rf and even strengthening cooperation with it. Experts explain this by the fact that now for China, cooperation with russia is a way to make it impossible for the United States to cooperate with the rf. China considers both countries western ones, and in this way try to weaken the West.

Trade between russia and China

China remains russia’s largest trading partner. In recent years, it has provided more than 23% of all russian imports. In 2020 and 2021, this was USD 54.9 billion and USD 72.6 billion, respectively. The largest categories of russian imports from China are machinery, equipment and apparatus (51%), metals and metal products (7.5%), textiles (7%), and chemical products (6%).

For China, these sales were significantly less important, accounting for 2% of total Chinese exports in 2020. However, it needs oil — more than 70% of the required volumes Beijing purchases abroad. In 2020-2021, two thirds of imports from russia fell on oil and oil products. And since the beginning of the full-scale military aggression of russia in Ukraine, China has started actively increasing imports of russian oil, gas and coal, which are gradually abandoned by Western consumers due to sanctions. For example, in the first hundred days of the full-scale russian-Ukrainian war, China purchased russian energy carriers for almost USD 13 billion, becoming their largest buyer. Moreover, russia offers Beijing discounts on its resources.

The PRC continues the expansion of the russian market, and its companies occupy niches that have been vacated after international companies left. In particular, Chinese automakers JAC Motors and Great Wall Motors announced that they remained in russia and planned to occupy niches that have been vacated after the withdrawal of Western companies. Chinese smartphone brands such as Realme, Vivo, Mi, Tecno, Infinix, iTel have significantly increased sales in the rf.

The yuan is used for russia’s trade contracts with both China and India. Chinese Ambassador to russia Zhang Hanhui reported that the sanctions “caused certain obstacles in business cooperation between russia and China.” Therefore, Beijing plans to further increase the number of payments in national currencies in trade with russia and is ready to fully use the relevant financial infrastructure and institutions to ensure the stable development of bilateral trade.

Sale of goods that can be used in war

In the first five months of 2022, the supply of chips from China to russia reached USD 50 million, which is almost twice as much as last year. The export of printed circuit boards — special plates for electronics — also increased significantly. Exports of aluminum oxide, used to make metallic aluminum, an important material in the arms and aerospace industries, are 400 times higher than last year. For selling electronics that might be needed in the war, the US has already begun to impose sanctions on Chinese companies.

Secret agreement between russia and the PRC

According to Intelligence Online, at the beginning of the invasion, China managed to negotiate with russia that, regardless of the results of the war, Beijing would continue to manage its interests in Ukraine on its own. In the PRC, the most likely outcome of the conflict was the transfer of Ukraine under the protectorate of russia. The agreement also ensures that the facilities in which Beijing invested will not be affected in the course of hostilities. In turn, China promised not to publicly take any side in the dispute. The Chinese media were allegedly allowed to call the war in Ukraine at most “tensions.” According to Nashi Groshi, russian missiles and bombs have so far bypassed the oil factory in Mariupol and the grain port in Mykolayiv, which belong to investors from China.

So far, China has more or less managed to balance and not be put under attack for its friendship with russia. However, the stakes getting higher. And it is likely that further decisions by China to support russia or Ukraine in the war will also be based on their strategy to restore Chinese domination in the world.