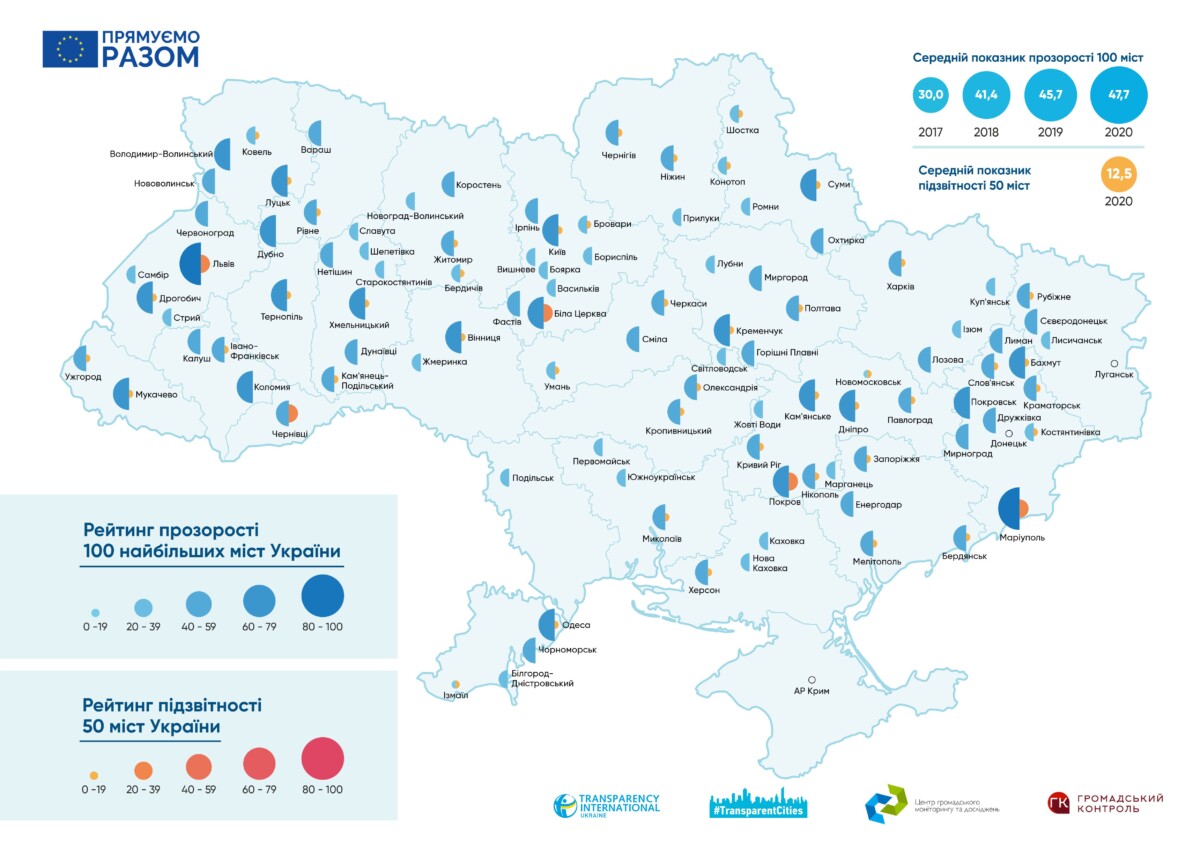 For four years now, Transparency International Ukraine has been compiling the Transparency Ranking of 100 Largest Ukrainian Cities. What did the study show this time?

In four years, the study turned into an influential tool of change for city councils, it is used by potential investors, and there is struggle for high positions in the ranking, since a high position is prestigious for the mayor and means more opportunities.

We were happy about this.

At first glance, transparency seems an abstract concept, but in reality, it is very tangible. For example, in the most recent transparency study, we found that in 2020, 93 cities out of 100 provide their residents with an opportunity to apply for a place in a kindergarten or school online. Moreover, most of these cities use an open waiting list for the distribution of children in preschool institutions.

It may seem like a small thing, but in fact it is a huge step that not only makes life easier for young families (as kindergartens are now a luxury), but also reduces corruption in this sector. You don’t need to go “talk” to the principal and give them gifts to get a spot.

Such results are promising, but there are few cases like this: some aspects of municipal life are quite different. What is transparent on paper is sometimes purely declarative and not too useful for residents.

We couldn’t ignore it. That is why, this year, our Transparent Cities program is presenting two rankings, the transparency ranking and the accountability ranking. The picture is a little different now.

Mariupol came up on top of both rankings in 2020. In transparency, Mariupol scored 86.6 points, and the runner-up, Lviv,—85.2 points. For the first time in four years of research, two Ukrainian cities fell into the category of “transparent”—that is, have crossed the mark of 80 points and proved their willingness to be closer to the residents. And this is a really great achievement for Mariupol and Lviv.

Drohobych (78.1 points), Vinnytsia (76.7 points) and Ternopil (75.2 points) also ended up among the leaders of the Transparency Ranking. In total, 57 cities improved their results, and Volodymyr-Volynskyi gained 22 points, rising by 27 positions in the ranking and ending up in top 10.

The average transparency score in 2017 was 29.9, and today, it is already 47.7 points — almost 50%. Considerable growth, isn’t it? And as I said, it is quite tangible, since residents get more information on the authorities’ activity.

However, the dynamics of transparency growth is declining every year: if last year this figure was 10.4%, this year it is only 4.4%. And this trend is expected to continue, as it is easier for cities to implement “simple” indicators, and more complex ones are often postponed.

Nevertheless, the transparency of Ukrainian cities is a real achievement of decentralization, and it should not be underestimated.

You Can Watch but You Can’t Influence

But in the second ranking by TI Ukraine, the Accountability Ranking, the situation is rather different. According to our calculations, the leaders are also Mariupol and Lviv, but their score is already 32 and 22 points, respectively. Also out of 100. This is not even close to half the points.

There is a noticeable gap between the levels of transparency and accountability in the assessment of other cities. The five most accountable cities of Ukraine, apart from Mariupol and Lviv, also include Pokrov (22 points), Bila Tserkva (21 points), and Chernivtsi (20 points). Kovel and Dnipro have the lowest scores (3 points each), followed by Shostka (4 points).

We found that, according to both studies, the level of accountability is four times as low as the level of transparency. A total of 50 cities were evaluated for the second ranking, and 45 of them scored less than 20 points and received the status of “unaccountable.”

Accountability is about the ability of citizens to influence the decisions of their government, control it and check its work. In essence, this indicator shows how much municipalities allow citizens to be engaged in their work. Our Ranking shows that they actually fail to do so. However, aren’t they ready?

We remember that transparency was also uneasy four years ago, and it took cities a long time to be where they are today. That is why, when we were drafting the methodology for our Accountability Ranking, we included opportunities for improvement at the very beginning. And we know that it is necessary and possible to work with accountability.

New Ranking as a New Peak

Of course, both studies were not prepared separately, but in combination. And although there are twice as few cities in the Accountability Ranking compared to the Transparency Ranking, if we compare the results, the trends are fairly evident.

First, the Ranking results demonstrate a significant gap between the practical and formal openness.

That is, the publication of data on the city council website or the adoption of some decisions does not mean automatic transparency of local authorities. For example, nominally, 11 city councils have registered profiles on the Dozorro portal and have adopted a document that obliges procuring entities to respond to requests on the platform, but only two respond to at least 80% of feedback and requests received on this portal.

Secondly, the level of transparency and accountability of cities does not depend on size or region.Everything depends only on the proactive stance of the local self-government and its willingness to change.

It is often small towns that can be the first to initiate best practices in transparency and accountability. For example, Dubno and Mukachevo have launched a system of electronic registration of applications for housing, which was a true breakthrough in this sector. And Drohobych, last year’s leader of the Transparency Ranking, introduced electronic registration for municipal educational institutions based on the blockchain technology.

In 2020, only 9 city councils out of 50 (Odesa, Mariupol, Oleksandriia, Brovary, Chernihiv, Drohobych, Kherson, Kamyanets-Podilskyi, Mukachevo) ensured online broadcasts of the meetings and announced them in advance. The other cities failed to provide such an important element of citizen engagement in their work, which not only negatively affected the cooperation of cities and communities, but also affected the scores in our research.

The epidemiological situation remains difficult, so city councils should look for new ways to ensure direct dialogue with citizens during the pandemic.

However, we know that nothing is impossible for Ukrainian cities, and we at TI Ukraine are ready to help. If city councils demonstrate a political will, willingness to improve and become more open to their residents, they will become more transparent and more accountable.

There are always new peaks to conquer.