On September 1, the High Anti-Corruption Court ruled to confiscate the assets of russian oligarch Vladimir Yevtushenkov. We are talking about shares in the following companies:

On August 24, the Ministry of Justice filed a corresponding claim to recover the property of Yevtushenkov into the national income. And already on August 31, the HACC began to consider the case in closed mode because it has secret information that can harm national security.

The confiscation of Yevtushenkov’s assets is the first case when such a sanction mechanism is applied to russians in Ukraine.

Under law, the oligarch has 5 days to contest the decision with the HACC Appeals Chamber. The same time limit is set for the appeal review itself. After the decision of the appeal, the Anti-Corruption Court must refer the decision to the Cabinet of Ministers of Ukraine. In turn, the Cabinet of Ministers should determine the body that will temporarily manage the confiscated assets. This could be the Asset Recovery and Management Agency, the State Property Fund, or other government agencies.

After the beginning of the full-scale war, the russian oligarch fell under the sanctions of Ukraine, Great Britain, and Australia because of his involvement in the war of the rf against Ukraine. Vladimir Yevtushenkov is one of the key investors in the russian economy. He founded AFK Sistema PAO holding, which includes MTS telecommunication company, network of Medsi clinics, share in Ozon online store, etc. After the introduction of sanctions, the oligarch withdrew from the board of directors of JSFC Sistema and transferred the block of shares to his son.

Yevtushenkov actually produces weapons for the russian army. It is his “RTI Systems” concern that supplies the Ministry of Defense of the rf with stationary radar stations “Voronezh,” designed to detect and accompany ballistic and cruise missiles. Thanks to this, RTI Sistema of the russian Ministry of Defense deployed a system of radar stations “Concern” along the russian border, which can detect aircraft and other air targets. And the company “Kronstadt,” which is part of the holding JSFC “Sistema,” has been serially producing military drones since 2021.

In addition to investments in the defense complex of the rf, Yevtushenkov was involved in the case of illegal privatization. We are talking about the sale of USD 2.5 billion of shares of Bashneft to the structures of JSFC Sistema at a reduced cost of USD 500 million. Two years after the investigation, the case was closed due to the absence of a crime, and Bashneft was transferred to state ownership.

How does the mechanism work?

In May, the Verkhovna Rada adopted a law that allows the confiscation of property of people and companies involved in the armed aggression of the rf. Currently, there are three different confiscation mechanisms functioning in Ukraine. The case of Yevtushenkov is considered within the law on increasing the effectiveness of sanctions on the assets of individuals No. 7194. In this case, confiscation means complete deprivation of property rights. 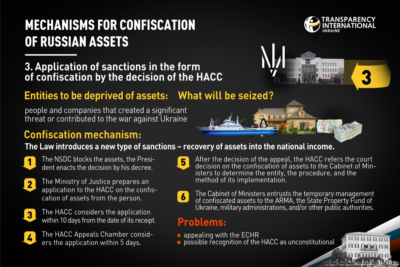 The confiscation of the assets of russians who support the war makes it possible to minimize the influence of russian businessmen and oligarchs. After all, they finance the murder of Ukrainians with their money. Thanks to such a mechanism, the assets and property of russians can be channelled to the restoration of Ukraine.

News
After the start of the full-scale war, only 3% of the money for roads has been spent through Prozorro
public_procurement
war
News
What’s Going on in Competitions to Anti-Corruption Bodies?
hacc
nabu
HACC Cases
HACC Decision: Developer Mykytas to Pay Bail of UAH 260 mln or Stay at Pre-Trial Detention Center
hacc
nabu
News
Busy Anti-Corruption Week
anticorruption_infrastructure
hacc