NAKO suggests how to improve the Draft Law on National Security 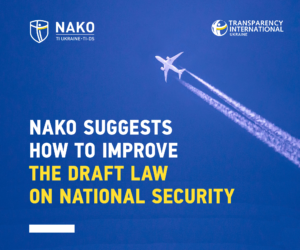 Experts of the Secretariat of the Independent Anti-Corruption Committee (NAKO) took active part in the development of recommendations to improve the Draft Law on National Security for its second reading in the Parliament. NAKO worked as part of Working Group on Defence and Security of the Reanimation Package of Reforms initiative in close collaboration with Ukrainian MPs and international partners.

The Draft Law on National Security was introduced to the Parliament by the President of Ukraine. It was developed with participation of the international experts. The Law is aimed at providing a legislative framework for the national security and defence reform and clarifying responsibilities of institutions within the sector.

Following the analysis of the draft Law, NAKO developed recommendations for introducing concrete amendments which help to ensure the democratic oversight and civilian control of the defence and security sector in compliance with NATO standards:

1. Parliamentary oversight over SBU and intelligence

Initially, it was suggested to set up a dedicated parliamentary Committee to exercise oversight over SBU and intelligence in line with NATO standards and principles. However, in the final version of the Draft Law introduced to the Parliament by the President, SBU  that was defined as “a public authority of special purpose with law enforcement functions” was taken out of scope for oversight by that Committee.

NAKO recommended to amendments that will ensure that parliamentary oversight over SBU (see Article 6 and Article 19 in the table).

2. Democratic oversight over security and defence sector by citizens

The existing version of the Draft Law can lead to limitation of constitutional rights of the Ukrainian citizens because it states that civic control can only be exercised through civic organization, but not by individual citizens.

Furthermore, one of the ways for Ukrainian citizens and civic organization to exercise civic control is through participation in civic councils set up in the public agencies of the defence and security sector. Current version of the Draft Law does not provide for such councils.

It is therefore recommended to create opportunity for citizens’ participation in civic control both individually and through civic formations, as well as through  civic councils set up in the public agencies of the defence and security sector.

Another reformist provision of the Draft Law is the appointment of a civilian Minister of Defence and his or her Deputies, which represents an important tool in the exercise of civilian control over security and defence sector. However, current edition of the Draft Law makes it possible  to appoint a person practically on the same day that s/he leaves military service.

NAKO suggests to require that the candidate for this position cannot be selected from among the persons who had held senior management positions in the military or law enforcement agencies at least for five years prior to the appointment.

The Draft Law provides for setting up a central government agency responsible for the development and implementation of state defence industry policy. Today, there is no such agency in place. Under current legislation, Ministry for Economic Development and Trade is only competent to prepare and summarize suggestions for the development of state policy on the functioning and development of the defense industry, while implementation of the policy is de facto exercised by State Conglomerate UkrOboronProm.

It should be noted that is not necessary to set up a new agency to ensure the development and implementation of state policy on defense industry as it would be enough to assign this responsibility to the existing central government agencies (e.g. MEDT or MoD).

NAKO recommends to set the deadlines for creating provisions for effective functioning of the central government agency responsible for the development and implementation of state defence industry policy.

5. Transparency in the defense and security sector and protection of state secrets

Protection of state secrets is a key element of national security. In this context, both under- and over-classification is equally dangerous.

Under-classification undermines the defense potential of the country and can pose a threat to national security, while over-classification results in excessive use of resources, opens the door to corruption, undermines the effectiveness of state defense institutions, leads to ineffective use of budget funds and procurement of low-quality defense equipment, and also limits the citizens’ right to access to information.

It is therefore suggested that a new edition of the Law on State Secrets is developed following the adoption of the Law of Ukraine on National Security, to ensure the balance between the citizens’ right to access to information and state’s interest in the protection of national security in line with best practices of NATO-member states.

Finally, State Defense Bulletin provides that public procurement system should be extended to conventional weapons by the end of 2017. NAKO recommends introducing relevant legislative changes to ensure achievement of this goal.

Following the analysis and discussions, NAKO analysist have prepared a comparative table with suggestions for the improvement of the Draft Law. The table and supporting materials were passed to a number of the Ukrainian MPs.