Where are, and what do high-profile corrupt officials do during the war?

The war diverts attention from the country’s internal problems. This is okay because everyone is focused on winning. Despite the widespread thought that this is not the time to discuss corruption, we think differently.

The anti-corruption system must be fully operational. Nowadays, there are especially many people who want to profit from the state and taxpayers. Therefore, suspects and persons accused of corruption crimes must attend court hearings, observe interim measures and, ultimately, be fairly punished. So, where are they, and what are they doing?

A few hours before the russian invasion, ex-MP of the “Opposition Platform — For Life” party Illia Kyva published a video urging russia to liberate Ukraine from Nazism. This is not the first pro-pussian act of Kyva. Previously, he openly supported putin, and recently asked him to be granted political asylum and russian citizenship.

At the end of January, Kyva fled to Spain, and after the war broke out — to Moscow. There he visited the propaganda channels, where he tried to discredit Zelenskyy: accused him of allegedly escaping and committing treason, and told other nonsense. Illia Kyva has already been deprived of his MP mandate and charged with suspicion of national treason. Currently, the State Bureau of Investigation intends to go to court to seize his property. Previously, Bihus.Info investigators found ex-MP’s undeclared house in Kozyn.

Moreover, Kyva became the first in Ukraine to feel the effect of civil forfeiture. The HACC recovered from him the unreasonably received UAH 1.25 mln from the lease of a pulp pit to the national budget.

Another probable collaborator is ex-MP Oleksandr Onyshchenko, a defendant in the “gas case.” He allegedly controlled a criminal organization that embezzled state funds from gas production and sale under contracts with Ukrgazvydobuvannya. The HACC considers his case in absentia because the ex-MP is hiding abroad.

On February 25, Onyshchenko commented on the hostilities on his Facebook page. He accused the US of using Ukraine to weaken russia. Thus, he manifested a pro-pussian position. Moreover, the ex-MP has russian citizenship, and in 2016, he was suspected of cooperation with the FSB. On the eve of the war, the Anti-Corruption Court completed its examination of the NABU-SAPO evidence and began to examine the evidence of protection.

On April 12, the Security Service of Ukraine caught a large fish — putin’s friend. Since the beginning of the war, Viktor Medvedchuk had been hiding from the SBU. He was involved in at least 9 criminal proceedings, including those related to corruption. For example, he is charged with abuse of power and receiving a bribe due to the withdrawal of part of the “Samara-Western Direction oil product pipeline” from state ownership. 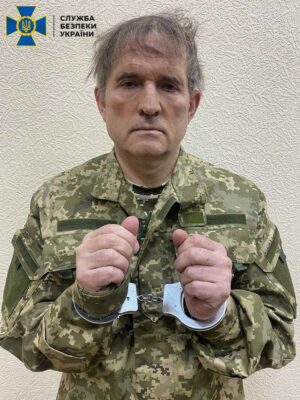 Those who stayed in Ukraine

Odesa mayor Hennadii Trukhanov is in the city and is not going to surrender it to the occupiers. Trukhanov conducts typical political activities — holds meetings with international partners, volunteers, visits local factories and medical institutions, records video reports. It seems that he really cares about the fate of Odesa, but it should not be forgotten that the mayor still appears in two criminal proceedings of the HACC — the “land case” and that of the Kraian plant.

In the first case, an interim measure was in force against him. Until April 3, according to the decision of the HACC, Trukhanov had to arrive at the first request of NABU detectives, inform about the change of residence, not communicate with witnesses and other suspects, hand over foreign passports and other documents.

Oleh Tatarov became a person involved in a separate episode of the case on fraud with apartments for the National Guard. He was suspected of bribing MIA expert Kostiantyn Dubonis. However, the Prosecutor General’s Office intervened in the case of Tatarov, having replaced the prosecutors. And then it was “buried” by the decision of the Shevchenkivskyi District Court of Kyiv.

The odious head of the Kyiv Administrative Court, Pavlo Vovk, reported that he remained in the capital: “I am working, supporting my colleagues, and helping volunteers. No one is holing up in VIP emigration.” He is suspected of passing deliberately unlawful decisions and interference in the activities of judicial bodies. In September, the HACC fined Vovk UAH 4,540 for not appearing in court. The KAC believes that he does not have the status of a suspect. Vovk still has not been given an interim measure.

Roman Nasirov, the former head of the State Fiscal Service, is involved in the “gas case,” in particular, he is charged with spending UAH 2 bln of public funds. Recently, the media reported that Nasirov had allegedly left Ukraine. However, the ex-head of the SFS refuted these rumors on his Facebook page. He stated that he had indeed crossed the border, but that was before the war began. Moreover, during the hostilities, Nasirov attended the court session, and in March 2022, the HACC changed his interim measure: it reduced the amount of bail from UAH 36 mln to UAH 31 mln. We’re expecting a verdict.

Many MPs are involved in NABU-SAPO cases. During martial law, they must remain in the capital and continue their lawmaking work. Most of them do this, some volunteer, strengthen the international advocacy front, or promote the exchange of prisoners, and some play with arms, such as Oleksandr Yurchenko.

In early April, the ex-MP of the Servant of the People faction was detained at a Kyiv checkpoint. Yurchenko allegedly began to bully the military of the territorial defense and even grabbed a gun for which he didn’t have a permit. There is a video online where the security forces conduct an educational conversation with a man very similar to Yurchenko, and he promises to be honest.

Let us remind you that Oleksandr Yurchenko is involved in the case of receiving a bribe: USD 13,000 for making amendments to a draft law and USD 200,000 for bribing committee members. His case is currently at the trial stage. The HACC last changed the interim measure for Yurchenko in December. The MP was assigned only one obligation — not to communicate with witnesses and experts in criminal proceedings until February 28.

Vladyslav Trubitsyn, an MP of the Kyiv City Council from the Servant of the People party, volunteers in Kyiv and joined the ranks of the Obolon Legion Volunteer Battalion. He mainly provides humanitarian and military assistance through the Ridna Obolon Charitable Foundation, which he founded with his colleagues before the war.

Despite this, Trubitsyn’s bribery case is still a thing. In early February, NABU detectives caught him receiving UAH 1.26 mln for assistance in the organization of retail trade in Kyiv. On February 11, the HACC chose an interim measure for him — detention with an alternative to bail of almost UAH 15 mln until April 9, 2022. Trubitsyn paid the money and was out of the detention center.

Another MP, Serhii Kuzminykh, now works in the Rada and is responsible for the humanitarian headquarters in Zhytomyr, which operates on the basis of the Rehabilitation Center of the Kuzminykh Brothers Foundation. Medicines, baby food, antiseptics, clothing, and other humanitarian goods are sent from there. However, the trust in the volunteer decreased a month before the war.

In January, Kuzminykh was detained by NABU detectives, while allegedly receiving a half-million bribe for assistance in concluding contracts between private companies and a hospital in Zhytomyr region. The court could not select an interim measure for a long time, so the HACC allowed bringing him to court. On February 24, at 10:00, the MP was to be forcibly brought to court, but the war began. Subsequently, the judges did not appoint a meeting, and later the Anti-Corruption Court withdrew the issue of election of the interim measure.

The next MP, Yaroslav Dubnevych, attends parliamentarian meetings, provides humanitarian assistance, presented more than one SUV to the military unit of the 24th brigade, and also handed them radio stations, headphones and other equipment. However, Dubnevych is the main defendant in the case of the embezzlement of more than UAH 93 mln of PJSC Ukrzaliznytsia. On February 8, 2022, the SAPO referred the indictment to the HACC, and on March 4, the first preparatory session in court was to take place. Ukrainians have been waiting for this case in court for a long time.

MP Serhii Shakhov is also worth mentioning. In November 2021, NABU detectives served him with charges of false declaration. According to the investigation, he failed to mention more than UAH 59.5 mln of in the declaration for 2020 in the form of: 13 apartments in Kyiv, 8 parking spaces, 2 houses, 27 land plots, a cottage, 2 cars, etc. The HACC extended the period of pre-trial investigation of this case until April 22, 2022.

MP from the faction “Batkivshchyna” Mykhailo Volynets was a defendant on the civil forfeiture claim regarding his asset. We are talking about an apartment that the MP purchased in the summer of 2020 for more than UAH 7.5 mln, but did not specify the source of almost UAH 3 mln for its purchase. In the end, the first and the appellate instance of the HACC refused to confiscate the apartment.

Although this case has already been completed, there is a possibility of opening another criminal proceeding. The NACP conducted an inspection and found that Volynets failed to declare the use of the Toyota Highlander SUV. The results of the inspection were referred to the Prosecutor General’s Office.

Currently, Volynets is in Ukraine, transporting humanitarian aid and ammunition to the military, sending the necessary things for the hospital and going to meetings with medical staff.

Helping the Ukrainian military, doctors, and ordinary citizens is right and necessary. However, this support should not prevent fair and impartial consideration of cases of potential corrupt officials in court. For committing crimes, they must be punished in accordance with the law.