What are the specifics of the HACC’s work and what is expected from the court in the future?

The answer to the demand of the society after the Revolution of Dignity was the creation of the High Anti-Corruption Court. Ukrainians sought justice and inevitability of punishment for corrupt high-profile officials. The “ordinary” courts could not cope with the pressure of the persons involved and sometimes the level of complexity of the proceedings. In some NABU-SAPO cases, the preparatory meeting did not take place for a year and a half.

Now, the picture is changing. In three years of work, the Anti-Corruption Court has passed 81 sentences in the first instance, of which 68 sentences are indictments, 25 are sentences approving a plea agreement, and 10 sentences are acquittals. Three sentences are classified. Among the convicts are MPs, judges, prosecutors, lawyers, heads of enterprises. 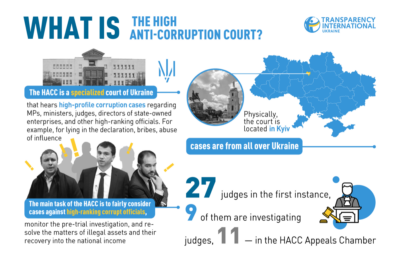 Currently, the Anti-Corruption Court is working in three directions: it considers criminal proceedings, cases within the framework of civil forfeiture, and the sanctions mechanism for the confiscation of russian assets.

As far as sentences for high-profile corruption crimes are concerned, in the first year of the HACC’s work, the court passed 16 verdicts, in the second — 29, and in the third — 36.

The former Deputy Minister of the temporarily occupied territories Yurii Hrymchak received one of the most severe punishments. On February 23, 2022, the HACC convicted him of extorting USD 1.1 million in bribes. This was the first high-profile case of grand corruption during the term of Volodymyr Zelenskyy. The HACC Appeals Chamber did not review the sentence, so Hrymchak is already serving 10 years in Boryspil prison.

The court began to work on civil forfeiture in May 2021. As of the beginning of September 2022, the HACC adopted three decisions: regarding the pulp pit of ex-MP Illia Kyva, the apartment of MP Mykhailo Volynets, and the housing and car of judge Maksym Kovbel.  However, this practice is not yet fully established. The institution of forfeiture continues to be formed.

Already during the war, the parliament adopted a law that provides for a new type of sanctions — the recovery of assets into the national income. This law applies to people and companies that have created a significant threat to the national security, sovereignty, or territorial integrity of Ukraine or have significantly contributed to it, including through financing, the commission of such actions by other persons, as well as by residents of russia — legal entities defined by law. Confiscation may be applied only by the decision of the Anti-Corruption Court and during the period of martial law.

Thus, during wartime, the HACC began working with cases regarding the confiscation of the assets of russians. Within the framework of this sanction mechanism, the court managed to adopt the first decision and confiscated shares in the companies of the russian oligarch Vladimir Yevtushenkov. Thanks to this tool, the money of russian oligarchs and businessmen can be channelled for the restoration of Ukraine, but the mechanism needs to be finalized. 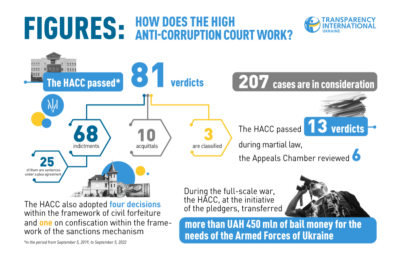 What do the studies indicate?

The results of a comprehensive study by TI Ukraine show positive dynamics in the work of judges. For three years, there has been a low percentage of procedural and processual violations, and judges formulate court decisions in a quality manner.

The HACC is improving every year: this is evidenced by both a gradual decrease in the average overall violation indicator and an increase in the annual number of sentences.

Among the negative trends in the work of judges, the pressure and threats are worth being mentioned. Thus, for example, in 2020, the court building was damaged by an explosion in the yard of the HACC.

As a response to the challenge, the HACC judges were granted the right to bring the participants of the process to administrative liability for contempt of court. Thus, the legal community abused the rights and violated the rules of ethical behavior by disrupting hearings, interrupting the judges, announcing recusal without motivation, etc.

War and sentences: the case of the Titanium Institute, the Air Express, and the Kharkiv Regional State Administration

HACC continues to administer justice after the beginning of the full-scale invasion of russia. From February 24 to September 5, the court already passed 13 sentences. Among them, four defendants received the most severe punishments:

In April 2022, the panel of judges of the Anti-Corruption Court convicted Rachkov for abuse of office, namely the transfer of USD 1.258 million of the Titanium Institute to offshore accounts for services that had not been provided.

Both used more than 20 fictitious enterprises, which led to the embezzlement of about UAH 116 mln. The HACC imposed an additional penalty of confiscation of all property, and deprived them of the right to hold certain positions for 3 years. Moreover, the HACC satisfied the civil claims of the SAPO prosecutor for compensation for losses of more than UAH 35 mln and UAH 81 mln.

Vynnychenko was convicted for receiving UAH 1.32 million in bribes. For money, he promised to “help” a private entrepreneur connect his company’s electrical installations to electricity networks.

At the same time, during the martial law, the HACC Appeals Chamber upheld three verdicts, partially changing the punishment in one of them and overturning another one regarding Mykhailo Pak, the judge from the Zakarpattia region.

In addition to its core functions, the Anti-Corruption Court, together with the parties to the cases, supports Ukraine at the front. During the first six months of the war, the Armed Forces received more than UAH 450 mln of bail money in NABU and SAPO cases. The pledgers expressed a desire to support Ukraine in this way, and the HACC adopted the relevant decisions.

For several years, the public has been awaiting the verdicts in the “gas case” of ex-MP Onyshchenko, the land case and the case of the Kraian plant involving the Odesa mayor Trukhanov, the amber case involving ex-MPs Poliakov and Rozenblat, the “Energoatom case,” and many others.

Thus, it is understood that the case of ex-head of the State Fiscal Service Roman Nasirov consists of 240 volumes. It takes time to review them. In addition, there are dozens of witnesses in the case, who also need to be interrogated. Lawyers sometimes abuse their processual rights to delay the proceedings.

There was a similar situation in the “Energoatom case,” involving ex-MP Mykola Martynenko. For more than a year, his lawyers disrupted and postponed the trial: they ignored and arbitrarily left the hearing, threatened the judges. By the way, the NABU and SAPO served Martynenko with new charges. He is charged with receiving EUR 311,000 of bribes and money laundering.

The full-scale war has also affected the pace of the consideration of cases. Thus, during February-March, there were no shifts in the case of ex-judge Mykola Chaus; in April, the court did not resume the proceedings because Chaus’ lawyers were not in Kyiv. It was only in May that it was possible to do that. The court has now questioned most of the prosecution witnesses. We expect a sentence this year.

It is worth saying that the Anti-Corruption Court cannot pronounce sentences equally promptly in one-episode cases of bribe and in cases of multi-stage schemes with the withdrawal of funds to offshore abroad. Sometimes the trial is long: it depends on the complexity of the case, the number of volumes and persons involved, deliberate delay by representatives of some parties, etc.

However, for a Ukrainian, it is the verdicts in the most high-profile cases that remain the test of the court’s work (and the entire anti-corruption ecosystem, too). Therefore, the degree of tension from the public and the media is unlikely to subside.

Despite all the challenges, the Anti-Corruption Court must set an example for the whole judicial system, perform its functions with dedication, maintain a low level of violations, introduce new and improve old practices, and administer justice effectively.

The HACC has a mission and must continue to maintain its level, however difficult it may be at times. Much has already been done. We expect the society’s hopes to be fulfilled and further high-quality legal work.

News
After the start of the full-scale war, only 3% of the money for roads has been spent through Prozorro
public_procurement
war
News
What’s Going on in Competitions to Anti-Corruption Bodies?
hacc
nabu
HACC Cases
HACC Decision: Developer Mykytas to Pay Bail of UAH 260 mln or Stay at Pre-Trial Detention Center
hacc
nabu
News
Busy Anti-Corruption Week
anticorruption_infrastructure
hacc